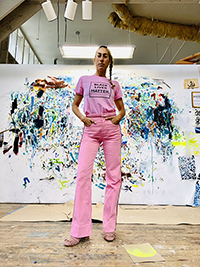 ANA TERESA FERNÁNDEZ was born in Tampico, Mexico in 1981. Her family emigrated to California in 1992. Since then, she has been based in San Francisco. Her practice explores the politics of intersectionality through time-based actions and social gestures that reference land art, performance, and history painting. Her multidisciplinary practice often begins with performance, and expands to video, photography, painting, and sculpture.

Major public projects include On The Horizon, which was featured in an exhibition titled Lands End, organized by the FOR-SITE Foundation in San Francisco in 2021. Collaboration is a core value of Fernández’s practice and includes projects such as SOMOS VISIBLES with Arleene Correa Valencia and Truth Farm with Guadalupe Garcia, Correa Valencia, and Ronald Rael.

A solo booth of Fernández’s work was featured at the Armory Show in 2022 as part of the Focus section, a special curated presentation of work by artists centered on environments and borders selected by Carla Acevedo-Yates, Marilyn and Larry Fields Curator at the Museum of Contemporary Art, Chicago. Fernández has been represented by Catharine Clark Gallery since 2021, and her recent solo exhibition, At the Edge of Distance, was met with critical success with features in the San Francisco Chronicle, Juxtapoz, and Squarecylinder. Past projects have been reviewed and cited in the Guardian, Vogue, The Economist, and The New Yorker, among other publications. In 2022, she was chosen as the featured artist in the New York Times: A New Climate San Francisco, a summit about responses to climate change.