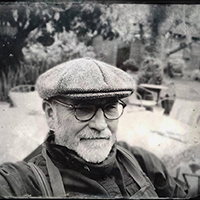 CHESTER ARNOLD’s paintings convey the complexities of the human psyche. His compositions often present skewed perspectives that often place the viewer at a remove, above unfolding narratives. In 2008, the San Jose Institute of Contemporary Art highlighted Arnold and other recipients of the 2005 Eureka Fellowship. In 2010, the Nevada Museum of Art presented a solo exhibition, On Earth as It Is in Heaven, with an accompanying catalogue. Additional solo exhibitions include the American University Museum, Katzen Art Center, Washington, D.C.; and the Sonoma County Museum, California.

In 2017, Kelly’s Cove Press published a monograph of Arnold’s work titled Evidence: Painting by Chester Arnold 1989 – 2017. In March 2018, Arnold’s work was featured in the Invitational Exhibition of Visual Arts at the Academy of Arts and Letters Gallery in New York, NY, and he was honored with an award through the Art Purchase Program.

In 2022, the artist will be the subject of a mid-career survey exhibition at the Fresno Art Museum, California titled Reports to the Contrary: A Persistent Vision - Paintings 1971 - 2021 by Chester Arnold. Arnold lives in Sonoma, California, and has been represented by Catharine Clark Gallery since 2003.