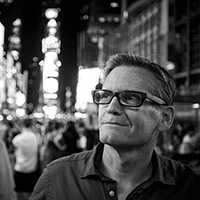 Chris Doyle is a multidisciplinary artist based in Brooklyn, New York, who received his BFA from Boston College and his Master of Architecture from Harvard University’s Graduate School of Design. Industrial ruin, debris, and waste are all featured in Doyle’s work, which focuses on societal need for restoration and conservation.

This exploration began with an interest in reinterpreting Thomas Cole’s series of paintings, The Course of Empire (1833 - 1836) with a video, Apocalypse Management, commissioned by MASSMoCA for the exhibit These Days: Elegies for Modern Times, and exhibited in 2009.

Doyle’s temporary and permanent urban projects include commissions for the U.S. Embassy in Sarajevo, Bosnia, the U.S. Ambassador's residence in Stockholm, Sweden, as well as for many
civic installations and private collections both internationally and domestically. His exhibition titled Unfolded has become a permanent installation at 21c Museum Hotel in Bentonville, Arkansas.

Chris Doyle’s work has been exhibited at The Brooklyn Museum of Art, MASSMoCA, P.S.1 Museum of Art, the Tang Museum, the Brooklyn Academy of Music, The Taubman Museum of Art, and The Sculpture Center. His animations have also been included in the New York Video Festival at Lincoln Center (2008) and the Melbourne International Arts Festival (2005). Doyle has received grants from the New York Foundation for the Arts, NYSCA, Creative Capital Foundation and the MAP Fund. He received the Borusan Contemporary Art Collection Prize and was named as a Guggenheim Fellow in the discipline of Film and Video. Doyle lives and works in Brooklyn has been represented by Catharine Clark Gallery since 2010.