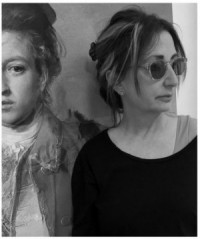 DEBORAH OROPALLO (American, born in Hackensack, New Jersey, 1954) received a BFA from Alfred University and an MA/MFA from the University of California at Berkeley. Originally trained as a painter, Oropallo incorporates mixed media techniques, including photomontage, video, computer editing, printmaking, and painting into her practice. Whether still or moving images, the resulting works bear traces of the distortions that evolve or remain from the image manipulation.  Her composite works layer visual sources producing dense interplay between time, place, form, and content. She has collaborated on video works with Andy Rappaport since 2017.

Oropallo’s work is the subject of two monographs: POMP (2009) published by Gallery 16, and How To, published by the San Jose Museum of Art. She is a recipient of a National Endowment for the Arts Award, a Eureka Fellowship from the Fleishhacker Foundation, the Engelhard Award and a grant from the Pollock-Krasner Foundation.

Oropallo lives in West Marin, California and has been represented by Catharine Clark Gallery since 2013.