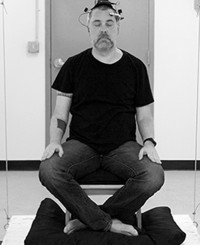 John Slepian received his Bachelor of Fine Arts in Film and Television from New York University in 1988 and a Master in Fine Arts in New Genres from the San Francisco Art Institute in 2002. His work explores the interdependence of concept, object, space, site, and viewer. Slepian creates work that is ephemeral, virtual, text-based, and performative. Much of his work is located in both cyberspace and in physical/actual space. For example, in a work titled Art is Not An Object (Sculpture), Slepian uses augmented reality technology and a custom iPad application to make the 3D-rendered object visible when a tracking graphic (QR code) mounted on a pedestal is viewed through an iPad application designed by the artist. Art Is Not An Object (Sculpture) is a technologically mediated object that questions the relationship between object and idea.

Exhibited widely across the United States, Slepian’s work has been included in exhibitions at P.S.1 Contemporary Art Center and Hunter College Galleries in New York, New York; San Jose Institute of Contemporary Arts and Zero1 in San Jose, California; and New Langton Arts and the Exploratorium in San Francisco, California. In 2014, Art Is Not An Object was exhibited in the media room at Catharine Clark Gallery in San Francisco and Transcendence was shown in the BRING IT! Performance Art Series at Zero1 in San Jose. Further, Slepian was the recipient of the Boston Center for the Arts grant in 2010, a New York Foundation for the Arts Fellowship grant in 2005-2006, and a P.S.1 National Studio Residency in 2002-2003. Born in Philadelphia, Pennsylvania, he now lives and works in Massachusetts. Slepian has been represented by Catharine Clark Gallery since 2004.