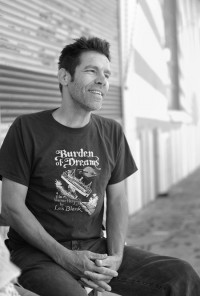 For 25 years, Kal Spelletich has been exploring the interface of humans and robots, using technology to put people back in touch with intense, real-life experiences.  His work is interactive, requiring participants to enter or operate his pieces, often against their instincts of self-preservation.  He probes the boundaries between fear, control and exhilaration by giving his audience the opportunity to operate and control fascinating and often dangerous machinery.

Kal Spelletich was born and raised in Davenport, Iowa, the seventh of nine children.  From a young age, he worked at his father’s construction company.  He became an avid carpenter and chemist, constructing his own tree houses and boats, and experimenting with electricity, fire, and alchemy in a childhood workshop in his family’s rambling Iowa home. Spelletich left home at the age of 15, living in abandoned buildings and on the streets, working as a dishwasher, cook, carpenter, auto mechanic, stagehand and union factory worker throughout the rest of his teen years. During this time, Spelletich discovered and explored art through photography, eventually earning an undergraduate degree at the University of Iowa, and an M.F.A. from The University of Texas at Austin, both in the field of Media Art. In 1988, Spelletich founded Seemen, his interactive machine art performance collective, which gained international recognition. Since then, he has performed, exhibited and lectured worldwide, collaborating with scientists, musicians, politicians and actors on various projects. Spelletich’s work has been included in numerous museum and gallery exhibitions over the past two decades, including the De Young Museum, SFMOMA, The Exploratorium Museum and Yerba Buena Center for the Arts, San Francisco, CA; California Folk Art Museum, Los Angeles, CA; Museum of Art and History, Santa Cruz, CA; Oakland Museum of California, Oakland, CA; and Headlands Center for the Arts, Marin, CA. He has exhibited internationally in Namibia, Germany, Croatia and Austria. Spelletich lives and works in San Francisco, California.