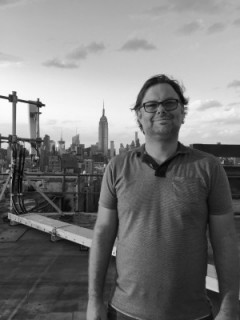 Through photography, video, and installation, Cooley's work is a meditation on our evolving relationship with technology, nature, and ultimately each other.  Cooley works with elemental forces beyond his control, addressing how these forces contend with each other, and how we exist among among them, using his experiences and direct interventions to provide the underlying conceptual framework of his practice.  Cooley's video work was recently featured in solo exhibitions at the Nevada Museum of Art (Reno, Nevada) Disjecta Contemporary Art Center (Portland, Oregon) The Musuem of Photographic Arts (San Diego, California), Ryan Lee and Pierogi (New York City) and Kopeikin Gallery (Los Angeles, California).  His work is in prominent collections including 21C, the Nelson-Atkins Musuem, and the Guggenheim Museum, and it has been reviewed in Aesthetica, Artforum, The Los Angeles Times, Hyperallergic, Time Out New York, and Whitewall Magazine, among others. This is Cooley's first solo exhibition in San Francisco.  He lives and works in Los Angeles.