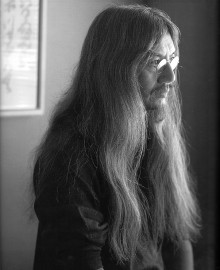 MASAMI TERAOKA was born in 1936 in Onomichi, Hiroshima, Japan.  He graduated in 1959 with a Bachelor of Arts in Aesthetics from Kwansei Gakuin University, Hyogo, Japan. Teraoka continued his education in the United States, earning a Bachelor of Art (1964) and a Master of Arts (1968) from Otis Art Institute in Los Angeles, California.

His works integrate reality with fantasy, humor with social commentary, and the historical with the contemporary. Teraoka’s early paintings often focused on the meeting of East and West, and series such as McDonald's Hamburgers Invading Japan, New Views of Mt Fuji and 31 Flavors Invading Japan address the impacts of economic and cultural globalization. While sexuality is a recurring theme in his work, his representation of sex shifted from positive depictions of free-love in the 1970s and early 1980s, to a deeper concern with unprotected sex as a vector for mortality and the spread of HIV in the mid-1980s.

In response to the AIDS crisis and its cultural impact, Teraoka began producing large scale works as a means of addressing major social crises. In the 1990s, Teraoka’s narrative paintings addressed social and political issues such as sexual abuse in the Catholic Church, hypocrisy in American politics, and social repression in Russia under Vladimir Putin’s leadership.

Teraoka’s recent paintings on panel are inspired by gilded Renaissance triptychs, continuing the narrative approach of his earlier, ukiyo-e inspired work, but rendered with baroque oil paints that reference Western ecclesiastical art. In 2017, Teraoka produced an adapatation of William Shakespeare’s The Tempest  in collaboration Viktoria Naraxsa of Russian activist collective Pussy Riot, which premiered at the Honolulu Museum of Art School. Since their collaboration, Viktoria has been featured as a protagonist in Teraoka’s paintings, interacting with Pope Francis, Vladimir Putin, and Teraoka’s former collaborator, the geisha Momotaro.

Teraoka’s work has been the subject of more than 70 solo exhibitions, including the 2017 solo survey Floating Realities: The Art of Dr. Masami Teraoka at California State University, Fullerton. Teraoka’s work has also been featured in solo exhibitions at the Whitney Museum of American Art (1979), the Arthur M. Sackler Gallery at the Smithsonian Institution (1996), the Asian Art Museum, San Francisco (1997), the Yale University Art Gallery (1998), the New Albion Gallery in Sydney (2012), and the Honolulu Museum of Art (2015), amongst other venues.

His work is represented in more than 50 public collections worldwide, including the Tate Modern; the Metropolitan Museum of Art; the San Francisco Museum of Modern Art; the Fine Arts Museum of San Francisco; the Arthur M. Sackler Gallery, Smithsonian Institution; the Hirshhorn Museum and Sculpture Garden, Smithsonian Institution; Archives of American Art, Smithsonian Institution; the Los Angeles County Museum of Art; the Crocker Art Museum; Honolulu Museum of Art; the Walker Art Center; the Hood Museum of Art, Dartmouth College; the Jordan Schnitzer Museum, University of Oregon; the Gallery of Modern Art, Glasgow Museums Collection; the Center for Contemporary Graphic Art and Tyler Graphics Archive Collection, Sukagawa, Fukushima, Japan; and the National Gallery of Victoria, among others. In 2016, Teraoka was awarded an honorary doctorate from Otis College of Art and Design. His work has been featured in multiple publications, including Ascending Chaos: The Art of Masami Teraoka 1966 – 2006, published by Chronicle Books in 2006 and Floating Realities: The Art of Masami Teraoka, published by CSU Fullerton in 2018 .

Teraoka lives and works in Waimanalo, Oahu, Hawaii, and has been represented by Catharine Clark Gallery since 1998.