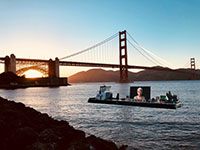 Night Watch 2021 was the West Coast debut of Shimon Attie’s Night Watch, a floating media art installation in honor of refugees and asylees. The floating art installation combines contemporary LED-technology with an historic mode of water transport – a barge – to create a sophisticated and layered artistic and sculptural work of art. The free public event was made visible along the shorelines of the San Francisco Bay and Oakland Estuary.

Night Watch features twelve, close-up video portraits of refugees who were granted political asylum in the United States. Displayed on a 20 ft-wide, high-resolution LED-screen, the portraits will travel aboard a slow-moving barge to allow for on-shore public viewing. The silently displayed images largely feature members of international LGBTQI communities, as well as unaccompanied minors, who fled tremendous violence and discrimination in their homelands of Colombia, Honduras, Jamaica, Kazakhstan, Nigeria, Peru, and Russia.

The creation of the Night Watch portraits was made possible through the artist’s relationship with the New York-based Moreart.org, who made introductions to refugees and asylees with whom Attie’s project aligned. During the process of shooting the portraits, Attie was privileged to hear personal stories, conversations of home and the uncertainty of futures, fear of political reprisals, sensitivities to trauma, homesickness, and individual hopes and dreams. “Night Watch,” Shimon Attie states, “is for the millions who have been forced to flee their homelands to escape violence and discrimination. For the fortunate few who have been granted political asylum in the United States.”

“No other state has taken in more refugees than California,” states Eleni Kounalakis, Lieutenant Governor of California. “As a former Ambassador and the daughter of an immigrant who started out in California as a farmworker, I deeply understand the value of immigrant and asylee communities. The compelling nature of Shimon Attie’s Night Watch accentuates a social issue of great importance – that of seeing ourselves in the other. Through a dignified artistic portrayal of refugees and asylees to the United States, Night Watch is a civic art experience that invites us to celebrate our strength in diversity.”

Beginning on the eve of September 17, 2021 and on September 18 and September 19, Night Watch travelled on a barge captained by Matt Butler and slowly navigated the cities’ shorelines, corresponding with scheduled live nightly performances on the coastal shorefronts.