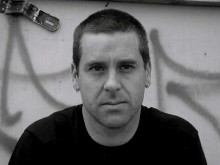 Sandow Birk was born in Detroit, Michigan and raised on the beaches of Orange County, California. He is a graduate of the Otis Art Institute of Parsons School of Design, Los Angeles, and resides in Southern California. Subjects of his work include gang violence, graffiti culture, prisons, surfing, skateboarding, Dante’s Divine Comedy, the Iraq war, and the Qur’an. Birk creates monumental series developed over the course of many years, often working across media to support his ideas through a multi-disciplinary approach—painting, drawing, printmaking, writing, film, video, and sculpture.

Birk has exhibited in dozens of museum and galleries, and his work is in many public and museum collections including: SFMOMA and the Fine Art Museums of San Francisco; the Los Angeles County Museum of Art and The Getty Center in Los Angeles; the New York Historical Society and the Metropolitan Museum of Art in New York; Harvard University Art Museum in Cambridge, Massachusetts; Biblioteca Nazionale Centrale di Roma, Italy; and Stadtisches Kunstmuseum in Reutlingen, Germany. Birk has received an NEA grant, a Guggenheim Fellowship, a Fulbright Fellowship, a Getty Fellowship, and a City of Los Angeles Fellowship. Most recently, Birk’s work has been the subject of several solo exhibition including at The Andy Warhol Museum (2011); McKinney Avenue Contemporary and the San Jose Museum of Art (2012); Arizona State University Library and Millersville University Winter Center Gallery (2013); and The University of Puget Sound Kittridge Gallery (2014). In 2015, W.W. Norton will publish American Qur’an, a book of Birk’s complete series of paintings on this subject, which will coincide with solo exhibitions at Catharine Clark Gallery and the Orange County Museum of Art.

Birk has collaborated with his wife, Elyse Pignolet, who is also a practicing artist, most notably in a series titled The 99 Names of God. Birk is represented by Catharine Clark Gallery where he has exhibited his work since 1994.