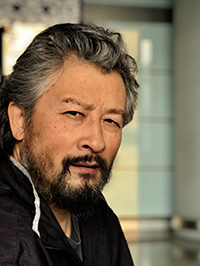 WANXIN ZHANG was born in ChangChun, China, and spent his formative years in the 1970's under Mao's regime. He was part of the first generation to receive a formal art education in college after to the Cultural Revolution in 1976. In 1985 he graduated from the LuXun Academy of Fine Art with a degree in sculpture.

In 1992, after Zhang established his art career as a sculptor in China, he emigrated to the United States to continue his development, and to study at the Academy of Art University, San Francisco, CA. Zhang was a recipient of the Virginia A. Groot Foundation Grant in 2006, and the Joan Mitchell Foundation Painters and Sculptors Grant in 2004.

In 2019, Zhang was the subject of a major mid-career retrospective and accompanying monograph titled Wanxin Zhang: The Long Journey at the museum of craft and design in San Francisco.

Zhang's work has also been featured in solo museum exhibitions at the University of Wyoming Art Museum (2006), the Fresno Art Museum in California (2007), the Alden B. Dow Museum of Science and Art in Michigan (2008), the Arizona State University Museum (2010), the Bellvue Arts Museum (2011), and the Peninsula Museum of Art (2015), among other venues.

Other Major presentations of Zhang's works have included the 22nd UBC Sculpture Biennial in Japan (2007), the Taipei Ceramics Bienial in Taiwan (2008), the Da Tong City 2nd International Sculpture Biennial in China (2013), and the inaugural Anren Biennial in China (2017). In 2017, the Asian Art Museum, San Francisco acquired multiple "brick" works from Zhang's Wall series for the museums permanent collection, as part of it's commitment to expanding it's collection of contemporary art. In 2020, the Crocker Art Museum, Sacramento, acquired Teapot Without Handle (2016) for it's permanent collection - it's currently on exhibition there.

Zhang lives and works in San Francisco, California and has been represented by Catharine Clark Gallery since 2013. Zhang's forthcoming solo exhibition opens at the gallery on March 5th, 2022.