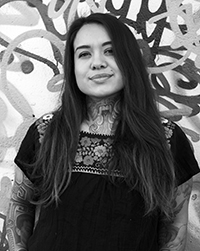 ARLEENE CORREA VALENCIA received her MFA from California College of the Arts. She is an inaugural recipient of the Bay Area Fellowship at Headlands Center for the Arts and received a regional Emmy award for her feature REPRESENT: Portraits of Napa Workers: Arleene Correa Valencia by KQED Arts. One of four children originally from Arteaga, Michoacán, Mexico, Correa Valencia is a DREAMER and beneficiary of DACA (Deferred Action Childhood Arrivals). The Correa Valencia family fled to the United States in 1997 and found home in California’s Napa Valley.

In 2021-2022, Correa Valencia was the subject of a solo monographic exhibition, Llévame Contigo, Yo Quiero Estar Contigo, at the Trout Museum of Art in Appleton, WI. She had her first solo exhibition at Catharine Clark Gallery in 2022 titled Aveces Quiero Llorar Porque Te Extraño, Pero Mi Mami Dice Que Estás Bien Y Pronto Estaremos Juntos Otra Vez | Sometimes I Want To Cry Because I Miss You, But My Mom Says That You’re Fine & That We’ll Soon Be Together Again. Correa Valencia will be featured in forthcoming group exhibition at the Berkeley Art Center in 2023. Born in Arteaga, Mexico and based in the San Francisco Bay Area, Correa Valencia has been represented by Catharine Clark Gallery since 2022.