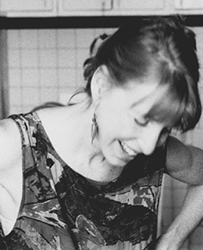 JULIE HEFFERNAN is an American painter whose artwork has been described by the writer Rebecca Solnit as "a new kind of history painting" and by The New Yorker as "ironic rococo surrealism with a social-satirical twist." Writing for The New York Sun, art critic David Cohen says of Heffernan’s exhibition: "These paintings are a hybrid of genres and styles, mixing allegory, portraiture, history painting, and still life, while in title they are all presented as self-portraits." Portraiture is a dominant subject in Heffernan’s painting, even while she also reflects on environmental, (art) historical, feminist, literary, social, and political subjects.

In 2011, Heffernan was elected a National Academician to the National Academy of Design in New York and in 2014, to the Board of Governors. She is a 2017 Fellow of the BAU Institute at the Camargo Foundation in Cassis, France; was awarded the Meridian Scholar Artist-In-Residence Fellowship from the University of Tampa in Florida and was the featured artist for the 2017 MacDowell Colony. In 2013, Heffernan was awarded a Milton And Sally Avery Fellowship at MacDowell and in 2012, she was invited to be the Lee Ellen Fleming Artist-In-Residence at the University of Virginia in Charlottesville. In 2010, she was the Commencement Speaker for the Pennsylvania Academy of Fine Arts and in 2009, she was the featured artist at the Brooklyn Academy of Music. A recipient of a National Endowment for the Arts grant, a New York Foundation for the Arts grant, a Fulbright-Hayes grant to Berlin, Heffernan was also a nominee for the "Anonymous Was A Woman" award. Since 1999, Heffernan has had more than 50 solo exhibitions at museums and other venues across the United States and abroad. Her work is represented in 25 museum and institutional collections. She has been represented by Catharine Clark Gallery since 2005.