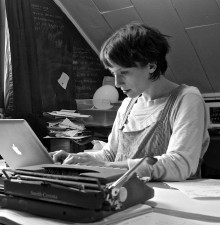 LENKA CLAYTON (born 1977 in Cornwall, England; lives and works in Pittsburgh, Pennsylvania) is an interdisciplinary artist whose work engages with everyday situations, extending the familiar into the realms of the poetic and absurd. Clayton is the founder of An Artist Residency in Motherhood, a self-directed, open-source artist residency program that takes place in the homes of artists who are also parents.

In 2017, she was commissioned by the Solomon R. Guggenheim Museum to create A talking parrot, a high school drama class, a Punjabi TV show, the oldest song in the world, a museum artwork, and a congregation's call to action circle through New York, in collaboration with Jon Rubin. Objects from six unique venues in New York City were circulated between sites, creating a network of social and material exchange. In October 2018, Clayton and Jon Rubin debuted the collaborative project Fruit and Other Things at the 57th Edition of the Carnegie International. Clayton's work has been exhibited at the Metropolitan Museum of Art, the Fabric Workshop and Museum in Philadelphia, the Carnegie Museum of Art in Pittsburgh, and Crystal Bridges Museum of American Art in Bentonville, and the Blanton Museum of Art, Austin among other institutions.