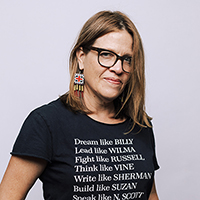 Marie Watt is an American artist. She is a member of the Seneca Nation of Indians and also has German-Scot ancestry. Her interdisciplinary work draws from history, biography, Iroquois proto-feminism, and Indigenous teachings; in it, she explores the intersection of history, community, and storytelling. Through collaborative actions she instigates multigenerational and cross-disciplinary conversations that might create a lens and conversation for understanding connectedness to place, one another, and the universe.

She has attended residencies at the Skowhegan School of Painting and Sculpture and the Vermont Studio Center; and has received fellowships from Anonymous Was a Woman, the Joan Mitchell Foundation, the Harpo Foundation, The Ford Family Foundation, and the Native Arts and Culture Foundation, among others.

Watt serves on the board for VoCA (Voices in Contemporary Art) and on the Native Advisory Committee at the Portland Art Museum, and in 2020 became a member of the Board of Trustees at the Portland Art Museum. She is a fan of Crow’s Shadow, an Indigenous-founded printmaking institute located on the homelands of the Confederated Tribes of the Umatilla, as well as Portland Community College.