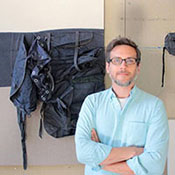 Michael Hall responds to his family’s military heritage in his practice, producing paintings and participatory works that address complex interrelationships, systematized aesthetics and the tenuous space between control and protection. Hall has exhibited in multiple venues including the San Francisco Arts Commission Gallery, Southern Exposure, the Richmond Art Center, the Palo Alto Arts Center and the Headlands Center for the Arts. He is the recipient of several awards and residencies including a 2008 Headlands Center for the Arts MFA Fellowship, a 2015 Lucas Artist Residency Fellowship at Montalvo Arts Center, and a 2016 Joan Mitchell Foundation Artist in Residence Fellowship at the Joan Mitchell Center, New Orleans. Hall’s work has also been featured in publications such as New American Painting, the San Francisco Chronicle and KQED Arts online. In 2016, he was appointed Assistant Professor of Drawing and Painting at the California State University East Bay. Hall lives and works in Oakland. Juncture is his first exhibition at Catharine Clark Gallery.